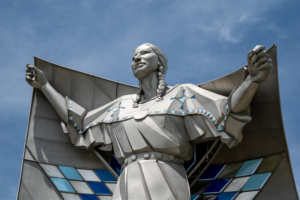 Traditional gender roles of Indigenous people varied greatly by region and community. Most of the activities of Native women were considered men’s work by Europeans. Female members of a tribe (or clan) cultivated the crops from planting to harvesting, along with collecting herbs, roots, nuts, berries and other foodstuffs. They gathered wood, managed their homes and raised the children.

In addition to their domestic responsibilities, Indigenous women had more of a voice than their European counterparts. Because the Native women’s’ activities were vital to the community’s welfare, many held important political, social and economic power. Their life-giving roles played a part in their political and social autonomy.

In many creation stories, it was the matriarch who gave life, through giving birth to children or through the use of their bodies to create the earth, from which plants and animals grew. Traditionally, the female roles reflected Indigenous cultural emphasis on connectedness, balance and autonomy.

These historical traditions may or may not reflect contemporary attitudes. Within the last century, my sister and I have raised our children and worked outside the home to help support our families. Mom raised three children (with dad) and worked as a nurse to contribute to the family income. Grandma Ida nurtured her large family and sold various handmade goods too numerous to list. My aunties have been loyal mothers as well as successful professionals. They’ve all made their communities better places to live. And (much like our ancestors) each of us at one time has grown gardens, built fires and set-up homes. These women have honored me with fine examples strength, humility and love that I hope to pass on to generations yet to come.