Trapping in the Badlands

nuary snow gathers deep in the woods and the howling of wolves can be heard echoing in the cold still air. Trapping and fur trade have been a part of the indigenous culture for centuries, first among each other and later with French and European fur traders. I have distant memories of my Grandpa Pete as well as my dad and brother during trapping season.

As this is the time of year for storytelling, I’d like to share a few words from my brother Mike (shown in photo): “The first (trapping) memory that comes to mind is when I was running my trap line in the Badlands on Thanksgiving Day.  I seldom saw anyone else in the area where I trapped, which was especially 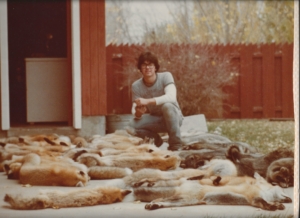 true on this particular day.  When I was about as far back into the remote wilderness, it began to snow.  The road quickly filled to a point where I was starting to get concerned about making it to the highway.  On my last stop, I caught a coyote.  After resetting the trap, I got back into my truck to hightail it to civilization only to discover that my truck wouldn’t shift into gear.  Not being much of a mechanic, I opened the hood and didn’t see anything out of place.  So, in a last-ditch effort to see what might be wrong, I looked under the truck and saw that the drive shaft was separated into two parts.  Right in the middle of the two parts, I noticed a small cotter pin.  I decided to try connecting the two pieces of the drive shaft with the cotter pin in hopes that this would solve my dilemma.  It did.  I had much to be thankful for that Thanksgiving Day.  I made it out of the Badlands safely and ended up catching three coyotes and a badger.  However, I’ve never ventured into the Badlands on a holiday since that time.”

We’re sure that the angels (and our spirit relatives) were looking over him that day, foreseeing that he’d someday be a huge part of the Pemmican Patty partnership!

Where We Come From
Scroll to top