There’s been a common misconception that Indigenous people all spoke the same language. A widely known fact is that the Navajo “Code Talkers” made an impact during WW1. But did you know that Choctaw, Cherokee and Comanche languages contributed to the “code” as well?

Just as there are different Spanish or German dialects, the same is true for the many tribes of Turtle Island. 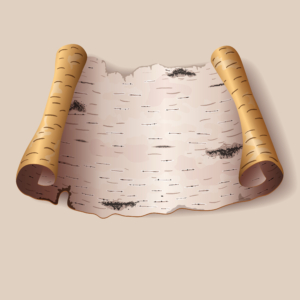 Piece of birch bark for scroll

Most early education of Native people came from observation and oral teachings, generally shared by elders of the communities. The Ojibway people recorded histories and legends on birchbark scrolls. Some plains tribes used the “winter count” pictographs. These pictographs documented significant events of the year, generally on animal hides or muslin. All across Turtle Island, sign language was widely used and still is today.

In the effort to “assimilate” our ancestors, Indigenous languages were stifled for almost a century in the U.S.  Native children were removed from their homes and placed in boarding schools. In these boarding schools, children were forbidden to and punished if they used their native tongue. My mother remembers her parents speaking Michif very rarely, and only in the privacy of their home. Today, although many of those languages have been lost, there is a great effort to revive the languages of many tribes. Some communities offer “total immersion” programs for both children and adults.

The variety of dialects in the Anishinaabe/Ojibway/Metis cultures alone is amazing! Northern and southern influence as well as Cree and French contribute to Michif language used by the Metis. I’ve tried to learn a few phrases without the help of a mentor, so please forgive any errors! In the language of my ancestors: